Stigma, the poor and inequality

I have written this quick post as a response to a recent article by Peter Taylor-Gooby, entitled: ‘why do people stigmatise the poor at a timeof rapidly increasing inequality, and what can be done about it?’.

The key question is why, when both poverty and wealth are intensifying, has there been a backlash against the poor, and not the rich?  This, as PTG rightly says, is a ‘puzzle’; it was not the case in the 1980s, when sympathy with the poor peaked at the end of the 1980s following recession and mass unemployment.

PTG outlines numerous arguments about why this might be.  The overall gist is something he calls the ‘moralisation’ of social divisions.  In other words, the middle-class (or ‘mass middle’) not only see themselves as richer than the poor, but morally superior.

I generally agree with this theory and in my own paper (here) I argue that this kind of moralisation has been dominant in political accounts of welfare reform since New Labour.  The key question then is where this moralisation comes from.  The argument in my paper is that politicians have a prime responsibility for driving it.

However, what you might call ‘public opinion sceptics’ argue the opposite: that politicians follow public sentiment rather than shape it.  I don’t think this is the case with welfare.  As the graphs in PTG’s paper show, public support for benefits fell dramatically with the election of New Labour.  I believe this asserts the importance of what politicians say and do in relation to what the public think.

PTG puts forward three alternatives of how policy could challenge the existing nature of public opinion on welfare: reciprocity (contributory benefits), solidarity (universality) and ‘predistribution’.  The first two are generally old news (although I think there is something to be said for emphasising a stronger contributory principle), whilst ‘predistribution’ seems a relatively seductive idea.  Equality without the expense.

As of yet, we are still relatively clueless as to what the central message of Labour’s manifesto will be.  So far they have toyed with both contribution and predistribution; yet both are relatively ambitious and will involve substantial policy change.  It would thus be easiest for Labour to adopt a ‘Tory-lite’ approach to welfare in 2015. Yet this would be based on the mistaken belief that the politicians follow the public.  And all this will do is play into the hands of the enemies of the welfare state, all of whom are only too happy to set the welfare agenda on their own terms.
Posted by Daniel Sage at 06:25 No comments:

What's wrong with the left's argument on immigration?

This is a very quick post (I have lots of work to do and shouldn't be blogging at all).  But today the Prime Minister is set to make a 'big speech' on social housing and immigration.  This has led to some interesting discussions on Twitter about how the left should tackle the immigration debate (similar, really, to debates about welfare).

In general, I think the left uses two arguments to try and change views about immigration:


As the current state of the immigration debate testifies, this strategy is failing.  Largely, I think it fails because a) it adopts a purely rational approach to a sensitive, emotionally charged moral issue and b) it paints people's concerns as being led by a belief in myths.

Alternatively, I think the left should use three different arguments to support immigration:

Adopting these arguments would kill two birds with one stone.  First, it would make a moral case for immigration - rather than a cold economic one.  Second, it would recognise people's concerns as genuine; something the left, too often, just doesn't do.
Posted by Daniel Sage at 05:21 1 comment:

Why do the Tories find it so hard to win elections? A loyalty explanation

Recently I've been looking at a lot of data from the BHPS, the long-running UK panel survey.  And amidst looking at unemployment, welfare-to-work and wellbeing, I've been side-tracked (procrastinating) by looking at people's choice of political party over time.

With regards to political parties, this means we can use panel surveys to see how flexibly people move their support between different parties.  And this is where the BHPS can come in useful.  It ran between 1991 and 2008; precisely the time when the Tory hegemony over UK politics was coming to an end (and is yet to return).

One plausible explanation of why the Tories have found it so difficult to win a majority is that their support moves about more.  In other words, people might move closer to the Conservatives in year X but then shift to another party in year Y.  In addition, Labour might find it easier to win a majority because people are less likely to shift their allegiance from Labour to another party.  So, looking at the BHPS, to what extent is this the case?

No. of recorded preferences for the three main parties, BHPS 1991-2008 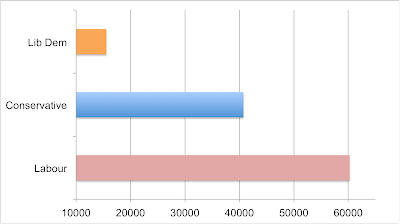 However, we're not really interested in the question 'how many people said they were closest to the main parties?' but, within their respective pool of supporters, how many people stuck with the same party over time?  Are Labour supporters more likely to stick with Labour than Tory ones are?

Percentage of respondents who stuck with the same party over time 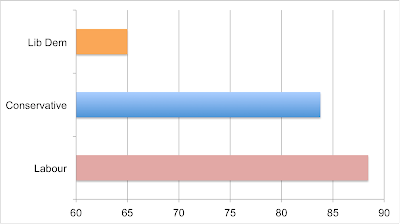 And this what we see.  The Lib Dems - perhaps unsurprisingly as the third party of British politics - have the least loyal supporter base: only 64% of Lib Dem supporters only ever supported the Lib Dems and not the two main parties.

However, the graph also shows the Tories falling short of Labour.  All in all, 88.5% of people who said they were closest to Labour out of the three main parties didn't switch their allegiance to the Tories or the Lib Dems.  The corresponding figure for the Conservatives is 83.8%.  This means that over time, whilst around 16% of Conservative supporters shifted their preference, only 11.5% of Labour supporters did.  This might sound a relatively small difference; yet as the Conservatives found out in 2010, they failed to recoup the vital 3-5% of the electorate they needed to get a majority.

There are of course many other reasons why the Tories haven't won since 1992: bad leadership, bad policies and, whilst it lasted, a booming economy.  But the above data suggests another important reason: Tory supporters are more likely than Labour ones to switch their political allegiance.  And with the rise of UKIP, for David Cameron things - surely -  can only get worse.
Posted by Daniel Sage at 08:05 No comments:

Contribution and three questions for the left on welfare

This is a quick piece provoked by a discussion I’ve been following on Twitter today, revolving around whether or not Labour should structure its welfare policy around the contributory principle.

There are genuine and valid concerns being raised about the contributory principle.  Mainly, what about those who can’t contribute much/at all: young people, carers, disabled people and so on.  For many on the left, contribution should not be the governing principle at the heart of the welfare state.

What I want to briefly argue here is that people on the left should be arguing for contribution.  And this applies to two different groups: those who see contribution as an end in itself and those who should see it as a means towards the kind of welfare state they want.  To my mind, this position follows logically from the answers to three questions.

1. What kind of welfare state does the left want?

While there is a small but vocal wing on the left who are generally supportive of the existing welfare state (probably with more done on work incentives and labour market policies), I think there is a majority on the left (split between the ‘Blue Labour’ and traditional social democratic wings) who want to radically change the welfare state to win back public support for social security.  This generally involves a desire to see more generous benefits, the protection against new social risks and properly funded and dignified back-to-work and training programmes.  While there are differences and disagreements, I think more unites these two wings of the left on welfare than divides them.  In general, this is an argument for welfare expansion.

2. Where do the public stand on this vision?

Now this is where welfare policy gets tricky.  Public attitudes to welfare are volatile.  While there is a strong level of residual support for the idea of a welfare state, it is surely the case that any talk of ‘welfare expansion’ will fall on deaf – and hostile – ears.  There is thus a profound gap here between what many on the left want and where a large majority of the public tend to stand.  Which leads to question 3):

3. How do you expand welfare when the public are against your ideas?

Amongst those on the economic right of Labour, the response to this question has been: ‘you can’t’.  The nature of this strategy is to see public attitudes as immobile and predetermined.

But this is the wrong strategy; not only is it defeatist and ignorant of the recent history of public attitudes, but it ignores the reality that, often, public opinion responds to what politicians say, and not vice versa.  Many on the left should thus see their vision of welfare expansion as ultimately possible.

However – and this is where contribution is important – this will take some time.  Shifting public attitudes is a long-term game and needs to be done incrementally.  Margaret Thatcher knew this.  The residual, stigmatising welfare state we have today is the end product of a 30 year journey.  When Thatcher first came to power, her radical plans to scale back social security were opposed by large swathes of the population.  In response, the governments of the 1980s and early 1990s implanted ideas and introduced change slowly.  Ultimately, as the present system testifies, they were victorious.

Labour should learn these lessons of history when it comes to welfare.  The road to a radically different and more generous welfare state will be long.  Contribution – while opposed by many on the left for good reasons – offers a way of increasing public support for welfare whilst boosting the protective powers of social security.  Whether Ed Miliband proceeds with this idea could define Labour’s election in 2015.
Posted by Daniel Sage at 06:34 No comments: