As ‘gizza job’ became one of the iconic catchphrases of the 1980s, the character synonymous with it – Yosser Hughes from Alan Bleasdale’s Boys from the Blackstuff – became one of the most devastating fictional representations of the psychological harm caused by unemployment. Made redundant, Yosser’s life soon disintegrates: he loses his savings, his children are taken into care and he becomes homeless. Driven to desperation, Yosser tries to commit suicide by walking into a lake. Bleasdale’s message was clear and is, simultaneously, one of the most robust findings in social science research: unemployment hurts the mind.
The evidence on worklessness leads to the argument that governments should try to protect people against the harmful mental health effects of unemployment. For the Right though, it is questionable whether we even should try to do this. Shouldn’t unemployment be difficult, the argument goes, so there is an incentive to find work? For the Left, typical solutions revolve around full employment schemes and higher benefits. But both of these positions are on shaky ground. Against the conservative stance, it far more likely that happier people will be more motivated to find a job than those driven to despair. The traditional centre-left response meanwhile would require significant increases in public expenditure; whilst this is not impossible it is, for the moment, politically untenable.
My research focuses on the potential that welfare-to-work programmes have for improving well-being outcomes for unemployed people. It is based on the idea that participating on a welfare-to-work scheme brings about a change in environment and status that is potentially, compared to ‘open unemployment’, more psychologically favourable.
The evidence from other countries is tentatively positive. Research from Germany, Sweden and the United States has shown that jobs programmes are apparently associated with improvements in subjective well-being. And the evidence from the UK appears to show the same. In analysing two large British social surveys – the cross-sectional Annual Population Survey and the longitudinal British Household Panel Survey – I find the results from both surveys are the same: compared to unemployed people, participants on welfare-to-work schemes have significantly higher well-being. The effect is not large (it isn’t comparable, for example, to the effect of actually being in paid work) but it does seem real.
So, does this mean we should start supporting big welfare-to-work schemes, like the Government’s Work Programme, as a means to improving the well-being of the unemployed? Whilst the straightforward answer seems to be ‘yes’, there are some important caveats to be found in the data.
The first is that welfare-to-work schemes appear to improve well-being, but only for certain types of participants. Take a look at figure 1 below, which shows the average happiness scores (ranging from 0 to 10) of unemployed people and welfare-to-work participants. The scores are broken down for three key socio-demographic variables: gender, age and highest qualification level.
The scores demonstrate that welfare-to-work appears to make some people happier compared to unemployment, but not others. For example, male welfare-to-work participants are much happier than other unemployed men; but the same cannot be said for women, where the relationship works the other way around. In addition, people on welfare-to-work schemes who are aged up to 49 appear happier than the unemployed, but this is not true for older participants (aged 50-65). Finally, the most explicit differences are found when we split the scores by highest qualification. For those who are highly educated (up to degree or A-Level), unemployment appears a brighter prospect than welfare-to-work. However, for those with lower levels of qualifications – especially those with none – there are apparently large gains to be had from active labour market programmes.
Figure 1: Average happiness levels for unemployed people and welfare-to-work participants, split by demographic characteristics 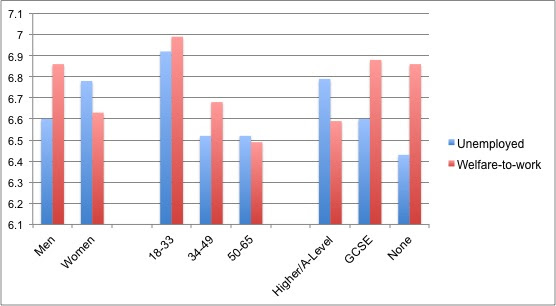 Note: Graph is based on data from the Annual Population Survey.
So this is the first caveat: welfare-to-work only improves well-being for certain people. The second is that not all welfare-to-work programmes have positive effects. Broadly, we can split these programmes into two types: those that involve intensified employment advice (like the Work Programme and, before it, the New Deal) and those that involve training or work experience (more work-based schemes). The graph below shows the mean scores for four indicators of well-being by the type of welfare-to-work scheme that people are on. Again, there is a clear trend. People on programmes that involve acquiring skills, qualifications or work experience have much higher well-being than those who are simply receiving more employment support. Indeed, being on the latter type of scheme is relatively similar to – and sometimes worse than– open unemployment.
Figure 2: Average well-being scores, split by type of welfare-to-work scheme 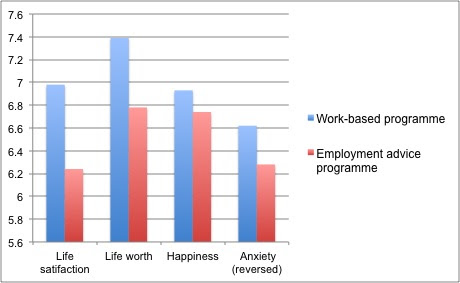 Note: Graph is based on data from the Annual Population Survey.
We don’t know why welfare-to-work has this variable effect, but it’s possible to pose some ideas. Many women have to balance job-seeking activity with caring responsibilities; requiring such women to participate in back-to-work schemes may only intensify these pressures. Older people with a lifetime of paid work may find the reality of unpaid work experience more humiliating than those with little to no labour market history. Those with low qualifications may have different expectations of work than those with a degree. Gaining skills, feeling valued and working directly with employers is a lot different to seeing an adviser once a week and being told how to write a better CV or dress for an interview.
The government is increasingly keen on thinking about how public policies can improve well-being. In this sense, unemployment should be a high priority area: it is one of the life events that is most damaging to happiness. Research shows that welfare-to-work programmes can improve well-being for those out of work, but we must be careful. The evidence suggests that in order to achieve well-being gains, such schemes must be appropriately targeted, personalised and worthwhile. Improving well-being through welfare-to-work is not straightforward. To make stronger and more widespread gains, it is likely that the government will have to try a much different approach.
Posted by Daniel Sage at 01:43 No comments:

Is the left really in meltdown across Europe?

There has been a lot of talk amongst political commentators this week about whether or not Europe (and the developed world more broadly) is seeing a lurch towards the right and a lurch away from the left.  This has been sparked by two election victories in which conservative parties ousted social democratic ones from power (Australia and Norway).  In the FT, Janan Ganesh says this is part of a wider context in which the left ‘called the crisis’ wrong in the eyes of voters.  Today, Toby Young tweeted that 'the left is in meltdown all over Europe’.

But how true is this?  Are voters really turning away from the left, en masse?

Division of power in the EU

All in all, the centre-right has power (either governing alone or as the largest party in a coalition) in six more EU countries than the centre-left.  So there is undoubtedly a momentum with conservatives, although not as much momentum as celebratory journos might have you believe.  Further, in places like Ireland and the Netherlands relatively strong social democratic parties share power with the right.  And by 2015, it is likely that the left will regain power in Sweden and the UK.

So why is there a general air of defeatism amongst the left in Europe?  And triumphalism amongst the right?  One reason is surely the nature of where the centre-right has been successful.  In all the countries where the crisis hit hardest (Portugal, Spain, Ireland, Greece) voters have put their faith in conservatives.  In Germany and Sweden, there has been an unparalleled dominance of the centre-right in countries with important social democratic traditions.

So the left needn’t been too downhearted: it is still in power across much of Europe.  Of course, the facts on who is in power tell us only so much about the policies they are implementing and the grounds on which elections have been won.  If the left is in power and largely implementing centre-right economic policies as a response to the crisis – as Francois Hollande has been accused of - the conservative commentariat might, after all, have a valid point.
Posted by Daniel Sage at 11:26 No comments: