The politics of income tax (part 1): are the rich digging their own grave?

This is the first of two posts I'll be writing on the politics of income tax.  This is an area I think has been underdeveloped in political and policy debates over the course of the Coalition's first term.  This is probably for several reasons.  Other issues (economic growth, immigration, welfare) have dominated and perhaps the government's most important tax reform - increasing the personal tax allowance - is ordinarily seen as a universal Good Thing.

In next week's post I'll be looking at the politics of raising the tax threshold (something I've briefly written about before).  But this week I want to look at the politics of the top rate of tax, which has come down under the current government from 50p to 45p.

In justification of the top rate tax cut, conservatives tend to argue (or boast) about how much the very richest pay as a proportion of the total tax take.  In their defence, this is true: the top 1 per cent pay around 30 per cent of all income tax revenues.  It is an astonishingly high proportion - and an astonishing example of how reliant our tax system is on the very rich.

Implicitly, the people who use this defence of the rich hint towards the moral vigour of the richest and the value of their contribution to society.  But there is also another, probably more accurate and certainly more popular, view: all this signifies is how much the rich are paid relative to the rest of society.  In other advanced countries the rich do not pay such a high share: this is because (a) they earn relatively less and (b) the middle earns relatively more.

This can be easily illustrated.  Imagine two societies (A and B) where population earnings both total £1m per year.  In both societies, everyone who pays income tax pays the same rate on everything they earn: 20 per cent.  This means that both societies have exactly the same tax revenue: £200,000. 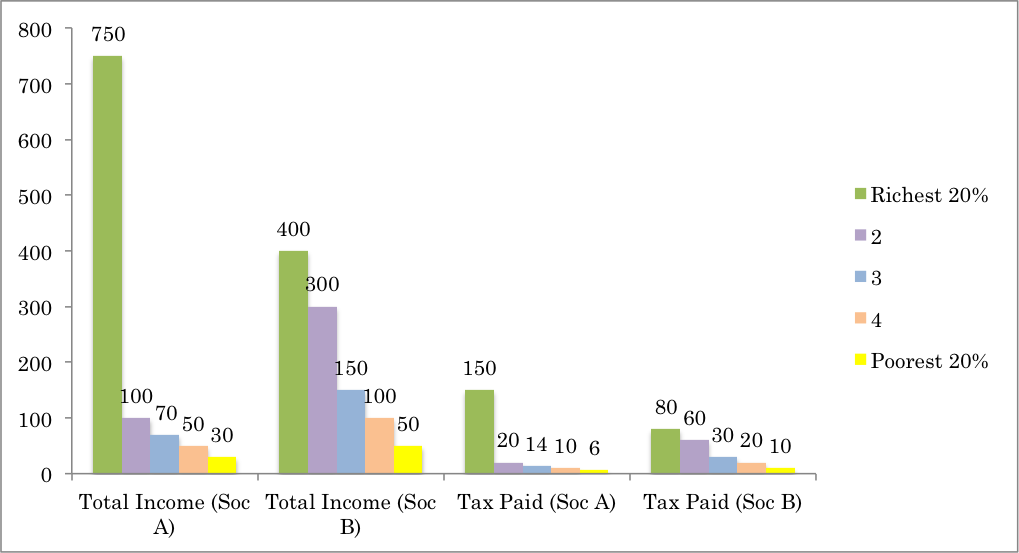 How equality reduces tax reliance on the rich

Thus, by emphasising the disproportionate contribution of the very richest, conservatives unwillingly draw attention to the enormous inequality in pay across Britain.  And in doing so, they also point to the solution.  If you really want a smaller tax burden on the rich, support policies that result in a much fairer distribution of incomes in the first place.
Posted by Daniel Sage at 05:36 1 comment: