The Norway tragedy and solidarity

Yesterday, the New Statesman blogger Dan Hodges wrote an article which criticised people on the left, particularly the author Owen Jones, for expressing 'solidarity' with the people murdered in the shocking attacks in Norway last Friday.
The root of Hodges' argument seems to be this. That it is has been wrong for people on the left to use their political beliefs as a way of connecting with the dead in Norway and, as a result, seemingly 'exceptionalising' the tragedy as one in which socialists and social democrats hold a particular empathy; distinct from what a conservative or liberal might be feeling, and distinct to what might have been felt had it been a different group of young political activists killed. Hodges believes expressions of solidarity to be a cynical attempt by left-wingers to 'appropriate' tragedy for themselves.
In fact, it seems more likely that the person guilty of cynicism is Hodges himself. The tragedy in Norway is a tragedy at numerous levels. For anyone with a basic sense of humanity, it is a crime of the most profound sadness. For the families involved, there is a grief that the vast majority of us will never understand. And for people on the left - for this was a deliberate attack on social democrats - there is the reality that people with whom we share a community with have been targeted so callously.
Hodges ignores (and sees as dangerous) how death imbues different emotions. Sympathy for the loss of a fellow human; grief for the loss of a loved one; and solidarity with those who we share a community with. He calls for his readers to put aside politics in the face of a tragedy, yet it is inescapable that Hodges seems to be making a deeply political point himself; about his distaste for what he perceives as the left-wing notion of 'solidarity'.
This is a deep error; solidarity is not a notion which belongs exclusively to the left. Solidarity belongs to all of us who exist as members of different groups and communities. To try to remove solidarity from the experience of tragedy is to remove something which is deeply ingrained within human social life. On September 11, Americans stood together in solidarity as members of a national community. After the Hillsborough disaster, the people of Liverpool were united as one city. And it is undoubted that Jewish people, wherever in the world, feel a solidarity with fellow Jews in the wake of a horror such as the Holocaust.
I doubt that Hodges would criticise the above examples of solidarity so readily as he does the left's reaction to the Norway tragedy. And I doubt he would so forthrightly disregard the solidarity which Norwegians are using to comfort one another at this very moment. Solidarity exists within a range of communities: the national, the local, the religious and (yes) the political. Dan Hodges' discomfort with the solidarity shown by the left perhaps says more about his own unease within this particular community than any noble wish to sympathise with those affected on Friday.
Posted by Daniel Sage at 23:24 No comments:

Have the Conservatives made a mistake in sidelining Blond's Red Toryism?

In the latest edition of Social Policy Review 23, Jay Wiggan writes a very interesting article on the social policy thinking behind Cameron's conservatism and its relationship to Phillip Blond's vision of Red Toryism (a copy of the working paper can be found here).
In the article, Wiggan argues that in most social policy areas - such as public service delivery, poverty alleviation and welfare reform - Cameron has by and large stuck to a neo-liberal, paternalistic strategy, much in the spirit of both Thatcherism and elements of New Labour. In doing so, Wiggan argues that Cameron has largely ignored the thesis of Red Toryism. The Red Tory thesis shares some elements of traditional conservatism (such as self-reliance, a distrust of the state and a concern with dependency and worklessness), yet is openly critical of the neo-liberal model, both in terms of its economic effects (which have produced even less market plurality) and harmful social consequences (such as the emphasis on individualism over wider claims of community and civic responsibility).
After reading Wiggan's analysis, I can't help but feel that the Conservatives have missed out by sidelining Blond's ideas, as opposed to putting them at the centre of their political strategy. In an age of mass distrust of both the state and the market, a thesis which offers a coherent critique of both would seem to offer the Tories the chance of genuinely moving beyond Thatcherism and into a new age. By rejecting this route, it is of little surprise that they continue to be tarnished with the nasty brush: as the party of individualism, privatisation and social ignorance.
Posted by Daniel Sage at 12:58 No comments:

Are more equal societies the most altruistic?

Ever since Richard Titmuss's landmark study on blood donation and social policy, the act of voluntarily donating blood has been held up as a rare example of true human altruism. In more recent times, advocates of more equal societies have argued that if we want more altruism - and thus a better and stronger society - we must also strive for more income inequality.
Some work I am completing at the moment is looking at this claim: that stronger, more cohesive societies are also more equal. One indicator I am examining is altruism, as measured by blood donation, and I thought I would share this finding on here.
The relationship between blood donation and income inequality (data available here) 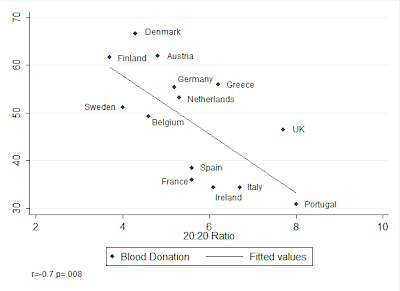 The graph above shows a strong correlation (r=0.7) between income inequality (as measured by the 20:20 ratio) and blood donation (as measured as the % of the population who have donated blood). The relationship is also highly statistically significant (p=0.008), meaning there is little chance that what is observed is due to chance.
Of course, we should not take such evidence as the be all and end all in the equality debate; the above graph just shows a simple bivariate relationship. Nevertheless, such evidence seems to be adding up. It is about time politicians - particularly those on the Left - woke up to it.
Posted by Daniel Sage at 08:45 No comments:

I've written before about what I think is a split within the Left regarding the socialist preference for a society with more income equality. In Wilkinson's 'Unhealthy Societies', he explicitly articulates this division, which I think is worth repeating here:
The social and health effects of larger income differences provide a powerful reason for reducing them. Greater equality has traditionally been a socialist aim. But even among those who continue to advocate it, we find their rationale has been infected by the logic of economic relations. Greater income equity was originally seen as a way of furthering social harmony and reducing the structural basis for conflict between people: so much so that the same aspiration was also expressed in the socialist practice of referring to their fellows as 'brother' or sister'. But increasingly, income redistribution has been advocated - not for how it might benefit social relations - but simply as a demand for a fairer share-out of goods and services among societies assumed to be made up of self-interested individuals. The change is an important indication of how far economic ideology has penetrated: even those who at least partly reject the market have lost sight of our social core and unwittingly translated the socialist aims to fit a marketised humanity The uninspiring vision is, at best, of competitive, desocialised equity.
Now I am not saying that 'Blue Labour' has purchase on this rationale for greater equality, but I do think the communitarian issues it highlights draw us back to these (what I think are) stronger arguments for equality.
Posted by Daniel Sage at 04:19 No comments:

How do we get healthier?

I've just finished reading Richard Wilkinson's 1997 book 'Unhealthy Societies', which explores similar themes (but is more health-related) than his co-authored book with Kate Pickett, called 'The Spirit Level'.
On page 114, Wilkinson produces a remarkable table which shows the additional increases in life expectancy in England and Wales throughout the twentieth-century (i.e. the additional years added to average life expectancy in each decade). I've reproduced the table below (male figures are in the left-hand column, female in the right):
1901/11 4.1 4
1911/21 6.6 6.5
1921/31 2.3 2.4
1031/40 1.2 1.5
1940/51 6.5 7
1951/60 2.4 3.2
1961/71 0.9 1.2
1971/81 2 1.8
1981/91 2.4 2
What is so interesting about the above table is that the largest increases in life expectancy happened during the two decades (1911/21 and 1940/51) when Britain was engaged in world wars. In other words, life expectancy increased most dramatically at a time of shortage, rationing and austerity. Such trends would run contra to what many of us would expect in the relationship between health and economics: more growth, less shortage, better health.
Why might this be? For Wilkinson, the reason life expectancy improved so dramatically is the different form of socio-economic organisation that war time demanded. Full employment was a necessity, income differences narrowed dramatically and the logic of the market was replaced by what Wilkinson calls "a deliberate policy designed to foster a sense of social unity and co-operation". In other words, individualism and social division were actively discouraged in favour of social cohesion and cooperation.
Much more research needs to be on the relationship between income inequality, market economics, social cohesion and health before anything like a causal relationship can be established. Nevertheless, if such relationships can be shown,they will raise extremely fundamental questions about the future for advanced, rich countries. It may mean that the centuries-old link between economic progress and social advancement is over.
Posted by Daniel Sage at 02:41 No comments: