Did 'welfare dependency' cause England to riot?

In trying to explain last week's riots, one of the most popular explanations amongst people on the right is that they were caused by 'welfare dependency'. In other words, pockets of society have become so infected by a 'something for nothing', irresponsible welfare culture that it ultimately culminated in the mass looting across England last week. The solution is to reform welfare even more radically, so that a 'life on benefits' is an option for no-one.

There's a simple way to see if conservatives are correct about this. Notably, the riots only took place in England with no similar events occurring in Wales or Scotland. These were peculiarly English riots. 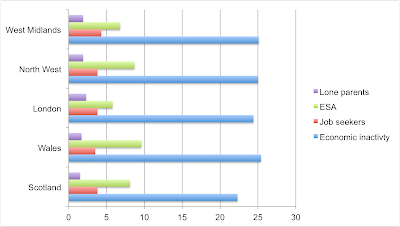 The graph above shows that there are no notable differences between the three affected regions (West Midlands, North West and London) and the two unaffected regions (Wales and Scotland). Indeed, out of all five regions, it is Wales which has the highest level of economic inactivity and the highest proportion of ESA/incapacity claimants.

The statistics just don't add up for people who think the welfare state is linked to the outbreaks of violence and looting this week. Not only do Wales and Scotland have extremely similar benefit caseloads as the rioting regions, they have a much stronger culture of welfare and social justice. Both countries are distinctly social democratic in comparison to conservative England, so the idea that either liberal criminal justice policy or social democratic welfare policy is to blame for the English riots looks to be unempirical nonsense. It is important that such arguments are heard before the Government takes its chance to cut the welfare state even further.

Inequality is a psychological - not material - problem

My post yesterday argued that one factor (and just one) behind this week's riots could be the high level of inequality we have in the UK, particularly in London (as several academic studies have shown).

A common response to theories of this kind is to hypothesise about the material lives of those guilty for the violence. Even before the looting, many poor, young people have the type of consumer goods - smartphones, HD televisions, designer clothes - which one does not usually associate with abject poverty. How can poverty and deprivation cause such anomic behaviour, when people possess the kind of goods that the poor could only dream of decades ago?

Krishnan Guru-Murthy expressed this point in his blog, arguing that: "If people riot because they can't afford the same consumer items as the rest of us then logic dictates that once they have got the trainers and televisions they crave the crime would stop".

Maybe, but only if you think inequality is a problem of material possession. On the other hand, if - as research such as this suggests - inequality is a psychosocial problem, then it will not make the blindest bit of difference what the rioters own and don't own.

The psychosocial thesis argues that the problem with inequality is the psychological and social stress caused by occupying a position of low status in society. When people are discernibly 'lower' than others in the social hierarchy, it induces all sorts of problems: ranging from stress and anxiety, to lack of trust and respect. When inequality is high - as it is in the UK - status differences are not only more visible within everyday social life, but also much wider and harder to break.

Status is a social phenomenon which is far more complex than what one owns and what one doesn't. The rioters might have plasma TVs, but they are still stuck on the bottom rung of society's ladder. And after this week, they'll be floating off into the gutter. Until we deal with our profound degree of status inequality, we will continue - to use our Prime Minister's words - to be a 'sick society'.

A tale of two cities

Not long has the dust settled on a third night of violence, with a deep worry for another one, that people begin the search for a cause behind the unprecedented and completely unpredictable riots which have engulfed London and other English cities. Early choruses of 'pure criminality' are being replaced by increasingly political and social explanations. Debates and arguments will surely rage for months.

While many on the political right have begun to lay the blame at the gates of the welfare state, I would like to put forward an alternative explanation, of chronically high levels of social inequality. In particular, inequality - of opportunity, income, status and so on - blights London. According to this article by the New Economics Foundation, London is one of the most unequal cities in the Western world.

The figures come from a book by Professor Danny Dorling, a geographer from Sheffield University. In relation to them, Dorling argues that London is so unequal it 'resembles an Indian caste system, where people only mix with those from their own income brackets'.

For those who have ever lived in London, such imagery should be familiar; it is a city where affluence and prosperity sit side-by-side with enormous poverty. So much so, that Londoners have become accustomed to living separate lives from others with whom they share the same living space. It has, de facto, become two separate cities who barely interact. This week, those two cities have clashed. It will haunt London for years to come.