Is workfare all bad? Some evidence from Sweden

The debate about 'workfare' - defined as requiring benefit claimants to participate in some form of work-based activity - has raged this past week.  But the debate has largely been clouded by hyperbole from both   those for and against.  Depending on your position, you are either likely to see the claimants involved as slaves or scroungers.

In times like this it's helpful to have some evidence on the matter at hand.  A key argument against workfare is the humiliation it might involve for participants.  Working for huge, profit-making companies like Tesco for around £1 an hour - whilst those around you get paid 6x as much - is hardly good for self-esteem. 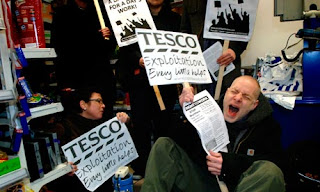 But what if this argument is wrong?  What if participating in work-based schemes is actually good for unemployed people and boosts their well-being, confidence and self-esteem?  This is the question posed in this paper from 2001 by Strandh, who considered whether participation in employment programmes boosted the well-being of participants in Sweden.

The theory that such programmes might be good for unemployed people is based upon arguments from social psychology that work fulfils certain human functions, like time structure, social contacts and collective endeavour.  Consequently, while workfare programmes might not ease the economic woe of unemployment, they may help the unemployed overcome the more psychological damage wrought by being unemployed.

In short, Strandh explored three different types of work-based programme: vocational training, work experience schemes (which take place outside the labour market, e.g. community work) and workplace participation.  It is this latter type of Swedish programme - workplace participation - which is most similar to the Coalition's workfare programme, as it involves unemployed people gaining experience in an ordinary labour market setting.

What Strandh wanted to know was whether participation in these schemes was associated with better well-being for participants (compared to those who didn't participate).  The results are quite surprising - especially given the furore of the past week.  In short, when controlling for a range of other factors, Strandh found that participation in work-based programmes was significantly associated with higher well-being amongst unemployed participants.


Further - and this is where it gets interesting - out of the three different types of programme Strandh looked at, he found that the programme with the strongest effect was the 'workplace participation' scheme (e.g., the one most similar in theory to the workfare scheme here).  Indeed, the 'vocational training' scheme had no effect on well-being.  The positive consequences of workplace participation schemes were even stronger for those who had been unemployed for a year or more, while the other two types of programme had zero effect for this group.

Half the challenge of a PhD seems to be psychology.  Chats with other students about PhD life invariably revolve around the more psychological aspects of work.  Problems seem to centre less around the actual content of study but more about the actuality of doing it: structuring the day, keeping motivated, overcoming barriers and so on.

For my own PhD I'm exploring the psychosocial effects of unemployment and, more specifically, how welfare policies can help mediate these effects.  One key theorist in the literature is Jahoda (1982), who argues that one of the reasons why unemployment is so mentally damaging is because the process of work fulfils five key functions:

Whilst reading Jahoda, I began to think that this theory might go some way into explaining the psychology of a PhD.  I don't think PhD students have any problem with no.4, status and identity, but I think Jahoda's other four 'psychosocial functions of employment' are challenged whilst doing a PhD. Structuring time is perhaps the most common problem cited by PhD students: the days are long and empty and it's solely up to you to fill them productively and efficiently.  Having social contact is an exception, not a rule.  Whilst our PhDs are contributing to a wider, collective knowledge, most of the time PhDs can feel highly narrow and individualised.  Finally, having regular activity can also be problematic, especially, I imagine, for first-year students engaging almost solely with the literature base.

While PhDs do present a challenge, understanding why this is - as  I think Jahoda's theory helps us to - can enable students to overcome these hurdles.  Structuring the day, linking up with fellow academics with similar interests and making the effort to attend conferences, lectures and workshops may just help us feel slightly - just slightly - like members of the real world.
Posted by Daniel Sage at 05:37 No comments:

In an interview with the Guardian this week, Ken Livingstone praised Ed Miliband as the man to make make us a 'Spirit Level Britain'.  Despite this being a rather cringeworthy turn of phrase, Livingstone makes a key argument: that Labour must strive to make Britain a more equal society in its income distribution

New Labour didn't believe that income equality was important.  As far as Blair et al were concerned, what mattered was raising the economic condition of the poorest; as long as that improved, the rich could be as rich as they wanted to be.  More traditional social democrats baulked at this easiness with inequality but grudgingly accepted it: the economy was booming and New Labour was able to utilise tax revenue to boost incomes at the bottom.

Now the economy isn't booming.  And in addition, we have lots of evidence that high levels of income inequality are linked to a range of health and social problems.  So what Livingstone is saying is that it's time Labour revisited inequality and, presumably, proposed policies which aim to reduce it.

How can this be done?


In The Spirit Level, Wilkinson and Pickett argue that there are two central paths to greater equality.

First, Labour could pursue the path taken by the Scandinavian countries.  This involves accepting a highly unequal labour market but using the welfare state to redistribute from rich to poor.  Could this work in Britain?  I don't think so: we have a much more liberal attitude to earning money and many - even people on modest incomes - don't like the idea of the state 'penalising hard work'.  Further, with such hostile attitudes to many of those who would benefit from a more redistributive state, it seems politically untenable and would require deep cultural change.


The second way to greater equality is how Japan achieves it: through a more equal labour market, with no need for the state to intervene with people's incomes.  But as Wilkinson and Pickett admit on their website, market incomes are relatively equal in Japan because of how their companies are structured and ran.  To ape this in the UK would require deep economic change and could certainly not happen over night.

Is there a third option?


If these two ways of achieving greater equality are hard to envisage in the UK, is there a third option available to the centre-left?

One solution might be to consider the ideas of a basic income.  In short, a basic income involves the state provision of a grant to each citizen and is paid unconditionally.  Whilst I don't think a full basic income is economically viable nor morally desirable, some variation of it could provide the Left with a solid plan for building a more equal Britain.

In theory, it's not hard to imagine a universal grant available to everyone except those who fall, say, in the top 20-30% of the income distribution.  The principle would be that a universal grant could improve the quality of life for everyone in society, except those who are very rich and for whom it would have a negligible impact.  You would have to increase taxes to pay for it, but since 3/4 of adults would benefit it would be a much more acceptable form of redistribution than that which goes from the very top to the very bottom.  Plus, if implemented it would mean savings could be made in other areas - there would be no need for JSA, for example, and other means-tested benefits could also be reviewed.

This all needs to be fully costed, but if affordable what could hold a universal grant back?  It would transform the scale of inequality over night and, given what know about its harmful effects, make Britain a much better place to live.
Posted by Daniel Sage at 08:47 No comments: