Welfare: it's not just how much you spend, it's what you spend it on

In an earlier post, I argued that in a time of high unemployment, governments have attached higher levels of importance to so-called 'activation' policies (ALMPS or welfare-to-work measures) that aim to boost and speed up people's return to work.  The data I showed demonstrated how, in comparative terms, the UK spends a small proportion of its national wealth on such policies.  In 2009 for example, we spent just 0.4 per cent of GDP on ALMPs.  The comparable figure for Denmark is nearly 1.2 per cent.

However, this paper by Giuliano Bonoli makes a crucial point: it's not just how much you spend, it's what you spend it on.  In short, Bonoli argues that there are four different 'policies within policies' when it comes to welfare-to-work:

Using data from the OECD, Bonoli compares how the structure of spending varies between countries on three of these policies: employment assistance, occupation ('direct job creation') and upskilling ('training'). Differentiating between such policies is important; most of us would agree, I think, that a more effective and fairer approach would be one that combined different elements of all three 'active' components.

The results are shown in the table below, taken from Bonoli's paper.  What the table shows is that not only does the UK spend much less than other countries when it comes to welfare-to-work, but it spends most of its budget on 'employment assistance': a policy basically limited to trying to better place unemployed people within existing jobs. 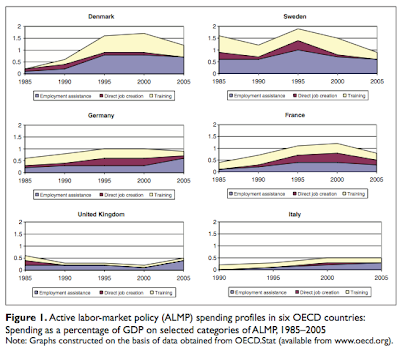 As is clear, other countries - most notably Denmark, Sweden and France - spend almost half of their welfare-to-work budget on training.  In the UK, the equivalent figure seems almost non-existent: indeed, the Conservative governments of the 1980s appeared to spend far more on training than either New Labour or the Coalition.

In times of high unemployment, there is only so far 'employment assistance' programmes - such as those that the UK government is hugely fond of - can go.  All such programmes attempt to do is make the 'matching' process faster and more efficient; they do nothing to create jobs or genuinely improve the mismatch between labour supply and demand.  Training programmes, alternatively, are capable of doing both of these things.  It's high time the government reassessed its welfare-to-work strategy to put training at its heart.
Posted by Daniel Sage at 09:38 1 comment: