When does 'workfare' actually work?

In the Chancellor's autumn statement to parliament, he raised the prospect of 'mandatory work activity' being imposed upon benefit claimants who had failed to find work after a certain amount of time. This is more commonly known as 'workfare': the provision of benefits in return for compulsory work. Politically and morally, workfare is deeply controversial.
More empirically though, what does workfare set out to achieve and is it capable of succeeding? The logic of workfare is as follows. Imagine individual A. A is unemployed and there are job opportunities available for him. However, once he accounts for all his existing income plus the benefits he receives from the government, A will only be £20 per week better off with a job than without one. A makes the decision that 25 hours a week in work is not worth an extra £20 and decides to continue claiming benefit. Contrast this with individual B. The pay-off from work will be higher for B but there are no job opportunities available.
Now, if the government introduces workfare (which it is now doing), it would follow that A and all those like him will now stop claiming benefit and take a job. While the pay-off from work will still only be an extra £20 per week, the option of remaining on benefit is no longer attractive: it will involve working the same hours for less money than what could be earned in the labour market. Meanwhile, B and his equivalents will move into workfare which could (theoretically) improve their job prospects.
In this situation, the government is able to make significant savings. Claimants like A stop claiming benefit and start paying tax, while B and co increase their prospects of finding a job.
While there are all sorts of (and rightly so) moral problems with this approach, there is the even bigger question of whether it would have any chance of working. The success of workfare depends entirely on a large group of people (the As) being voluntarily unemployed; yet in such a difficult labour market - where the vast, vast majority of people do want work - the logic of workfare just doesn't add up to reality. Instead of trying to deter people from using the welfare state, it is far better to give them what they need, whether that is personalised support, intensive counselling, training schemes or (heaven forbid) an old-fashioned benefit while they simply wait for a job to come up.
Posted by Daniel Sage at 06:12 2 comments:

Should the Conservatives apologise for 'welfare dependency'?

In the year and a half that the Coalition has been in power, perhaps the most cited quip from ministers has been the call that Labour should apologise for increasing the size of the UK's deficit. While this is a clear political ploy to strengthen the perception amongst voters that Labour was to blame, it raises an interesting question about whether political parties should admit fault wherever it may lie.
If this is the case, then there is surely a strong argument that the Conservatives should come out and apologise for their record on welfare. It is well-known throughout policy and political circles that the Incapacity Benefit caseload increased to such a large extent because the Conservative governments of the 1980s deliberately encouraged unemployed people to make the transition to sickness benefits. We can see this just by looking at the local authorities in England and Wales with the highest Incapacity Benefit caseloads. According to Bambra (2011), these are:
As is clear, these are all areas that suffered massively from the economic restructuring of the 1980s; if the unemployed in these authorities weren't transferred to IB, they would have made the unemployment figures look even worse than they were at the time.
It was a disgrace that instead of supporting unemployed people and helping them find work again, the Conservatives were content to classify them as 'economically inactive' and worthy of no real back-to-work support. It is an even bigger disgrace that it is these same people that the Coalition is intent on systematically stigmatising through its campaign on 'undeserving' groups. Perhaps it is time for the Conservatives to issue an apology of their own.
Posted by Daniel Sage at 05:06 No comments:

How 'active' is welfare in the UK? Spending on welfare in OECD countries

Unemployment figures last week showed that the UK is facing a serious problem of rising unemployment, with particularly worrying figures for young people. But how much do we do as a country to help unemployed people find work? One popular way that governments across the West have recently utilised to try and fight unemployment has been 'active' welfare, i.e. the provision of extra training for unemployed people in return for greater conditionality.
The graph below (taken from this DWP report) shows that the UK is one of the smallest spenders on active welfare compared with similarly advanced OECD countries. We spend just over 0.3% of GDP on active labour market policies, compared to other countries - like the Netherlands and Denmark - who spend over 1%. 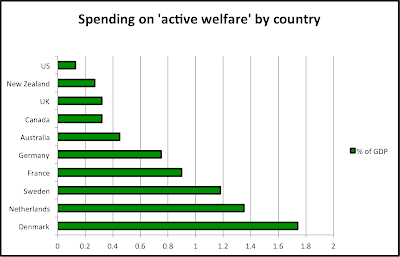 Although these figures are from 2009, there is no evidence that the Government is seriously committing significantly higher amounts of funding to active labour market policies. They may be scrapping the New Deals in favour of the Work Programme, but this seems to be primarily a matter of tinkering with provision and incentives, not investment.
We all know that Britain faces a crisis in unemployment with the prospect of a generation of young people excluded from the labour market. If we want to deal with unemployment we need to direct more investment towards active measures which skill people appropriately for industries where there is a demand for labour. This should be a policy area where left and right can, for once, agree.
Posted by Daniel Sage at 07:41 1 comment:

I recently reviewed 'Why Some Politicians Are More Dangerous Than Others' for the LSE Politics and Policy blog, a new book by James Gilligan, Clinical Professor of Psychiatry at New York University. In the book, through observations covering over 100 years of US data, Gilligan outlines distinct trends in patterns of homicide and suicide ('violent death'). Namely, he observes that when a Republican is president rates of violent death increase and when a Democrat is president rates of violent death decrease. He puts this down to the much higher levels of socio-economic stress which are caused by Republican policies, such as increased unemployment and income inequality. Quite literally, it seems that conservatism kills.

The question which naturally arises for the British reader is whether this pattern holds in the UK. In other words, is increased mortality correlated with Conservative governments? Does conservatism kill?

This 2002 paper from Shaw, Dorling and Davey Smith sets out to answer this question with regards to suicide (with the rather morbid sub-heading 'Do conservative governments make people want to die?'). In the paper, the authors compare the suicide rate (per million) for each five-year period over the 20th-century. They then assign a prime minister to each five-year period (where there is more than one, the PM in power for the longest period during the five years is chosen).

The results are pretty stark. For example, the five most 'suicidal' five-year periods are as follows:

All in all, the authors state that the mean suicide rate during period of Labour and Liberal rule was 103 suicides per million per year. When the Conservatives were in power, the suicide rate was nearly always on average 1.17 times greater than this. In total, the paper argues that the 17% excess suicide attributable to Conservative governments is equivalent to 35,000 extra suicides over the past century. Or, to put it more bluntly, 2 suicides for each day that the Tories are in power.

The paper by Shaw and colleagues was a response to an Australian study which also found that higher rates of suicide were associated with conservative governments. So from just these three examples, we have evidence of a link between conservatism and death which spans the US, Britain and Australia. The reasons for this are unclear and contested, ranging from psychosocial explanations (there is more hope under centre-left governments) to material ones (there are better public services and lower poverty rates).