Is immigration a barrier to a better welfare state?

One of the most common theories about why the UK has a much lower standard of welfare provision than the Scandinavian countries is that it is less ethnically homogeneous. In other words, the Scandinavians are more willing to pay in to a welfare state because their fellow citizens are 'more like them'. It is harder to build a socially cohesive society, and thus a society which prefers higher welfare, with a high level of multi-culturalism.
However, data from the 2009 UN Human Development Report suggest this theory is far too simplistic. As the graph below shows, the UK's immigrant population is only slightly larger than that of Norway and Denmark. And with regards to Sweden, we actually have a lower percentage of immigrants as a proportion of national population.
Immigrant population as a percentage of total population, 2005 (UNHDR, 2009) 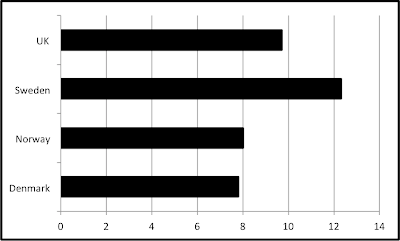 Such evidence does not eliminate the population differences between the UK and the Scandinavian countries. They are of course much smaller, which may make for a more cohesive society. Equally, historical immigration rates may also be lower than the UK's, thereby providing the basis for a greater sense of societal reciprocity. Nevertheless, in the welfare debate it is always useful to separate the facts from the fiction. And for those who want a better welfare state, knock down the false barriers which the Right have erected.

Why do we find Philip Davies' comments so offensive?

Last Friday, the Conservative MP Philip Davies caused a storm of offence when he suggested that disabled people should be removed from minimum wage protection in order to boost the number of them in work. While most of the country wreathed in disgust, libertarians rose to his defence. Sam Bowman at the Adam Smith Institute for example wrote this riposte, arguing that imposing a 'false price' on a disabled person's labour leaves many of them without work.
Libertarians cannot understand the public reaction to Davies' comments: it is a simple matter of capitalist economics, they argue, that people have different values in the marketplace. Look at 16-20 year-olds, whose minimum wage is lower than everyone else's. It is lower because they are on average worth less to employers than older workers, who presumably have more marketable skills to offer.
However, the minimum wage debate is not really about economics, for what it illuminates is the facet of capitalism which we are perhaps most uncomfortable with: the deeply crass way in which it values human beings. The gut reaction to Davies' suggestion is that it is morally wrong: a disabled person is not worth less than anybody else. But on the market, people are worth different things. Young people are (see above); most women are if they are looking to have children; older people are if they are close to retirement. And sadly, many disabled people probably are too.
What stories such as this remind us is that the economic system is made up of human beings for the benefit of human beings, yet it often appears to devalue and corrupt the inherent worth of certain people. This belief has been the basis of the Left's challenge to capitalism from Marx onwards, as it attempted to deal with the perceived 'dehumanising' elements of the market system.
Thus, minimum wage legislation is not about economic efficiency but about humanising our economy. It is about saying that while we are happy to accept that the market produces some inequalities, humans are equal in certains ways - across gender and disability, for example - that our economic system is not free to ignore.
Posted by Daniel Sage at 23:33 1 comment:

Ideology and the death of principle

Whenever the Coalition is seen to be acting in a particularly neo-liberal and/or conservative way, it is instantly branded as acting 'ideologically'. The implementation of enormous public sector cuts, married tax allowance and the NHS reforms have all been castigated for being ideologically-driven. While I do not like the Coalition, I find it bizarre that we feel so affronted by the prospects of politicians who act out of principle. If political parties don't have any principles or values, what else can they act from?
The current expectation that politics should be an ideology-free zone seems to stem from the early days of New Labour, who believed that in order to win power it was necessary to convince the electorate that its policy-making process would be free from (left-wing) ideology. In the 1997 manifesto, Tony Blair proudly claimed that New Labour would not be driven by 'outdated ideology': what will count is what works.
'What counts is what works' subsequently became the leading mantra for New Labour as it drove forward a purported model of 'evidence-based policy'. However, there are two obvious problems with the idea of evidence-based policy. The first is that it believes that science can provide an objective answer of what policies to choose ('what works'); the second is that politics can be removed from the policy-making process in favour of objectivity and pragmatism ('what counts'). As New Labour and the electorate found out, scientific evidence cannot provide answers to difficult moral, political questions. Further, when we mistakenly claim that it can, we project an image of politics as a scientized, mechanistic and deeply unpolitical process.
Hence now, the Coalition's more overtly political reforms are attacked as being inspired by ideals, not evidence. Not only is conservative ideology attacked, but the whole idea of ideology itself - of principle and purpose - is mocked and discarded by critics. However, when we attack and dismiss ideology, we attack almost the central point of politics itself: that politicians and political parties should actually believe in something.
Yet the evidence-based view marches on. In a new book, the economist Tim Harford advocates an even more pragmatic approach to politics based upon trying new policy approaches irrespective of political principle. However, I think it is time to stand up for principle and values; when our politicians cease to believe in things, it is highly likely that we will too.
Posted by Daniel Sage at 22:12 No comments:

Scrounging off the poor - Labour and benefit bashing

According to the papers, Ed Miliband is set to make a speech today in which he attacks the 'something for nothing' culture which benefit fraud is a part of. This follows feedback from Labour's policy review that voters are socially conservative and want politicians to go far and wide on welfare reforms.

Subsequently, Ed Miliband looks to have fallen into the 'opinion poll trap': that politicians must pander to public opinion rather than seek to change it in line with their own principles.

Data on public attitudes however show this to be false. Look at the graph below. It show the proportion of respondents from the British Social Attitudes series that believe benefits for the unemployed are either (a) too low or (b) too high. The data show that there was once a time, before 1997, when the UK was a country predominantly sympathetic to those on benefits and believed in giving more financial support. 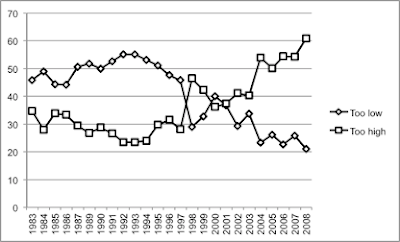 What is particularly interesting is the timing of this change in attitudes. It happened abruptly in 1998, when the percentage of people stating that unemployment benefit is too high jumped from around 30% to almost 50%. It dropped a little in subsequent years but in the early 2000s became the clear majority view.

In other words then, the emergence of an anti-benefits culture coincided with the election of New Labour who, let's not forget, put conditionality and responsibility at the heart of welfare reforms like the New Deals. New Labour, probably more than what it wished, changed public attitudes in line with its own changing stance on the welfare state.

This evidence shows a truth which seems long forgotten by political parties: that if you want to, you can change society. Ed Miliband does not have to pander to people's prejudices about the benefits system: he should challenge them and change them.

This week was the end of the latest Adam Curtis documentary, All Watched Over by Machines of Loving Grace. I also re-watched his 2007 series, The Trap, which I remember watching back when I was at UCL during my second-year, when I think most of its meaning passed me by: this time it made much more sense.

The documentaries are powerful, complicated and contain deep philosophical and political ideas (in fact, it is to the BBC's utmost credit that they commission television like this in the age of the X Factor and Britain's Got Talent). They are also beautifully crafted films with a captivating use of music, archive footage and original interviews.

In terms of Curtis' message, there is one thing that strikes me particularly; this is that despite Curtis' overwhelmingly brutal analysis of modern society, I think he is an optimist about humanity and what we can achieve. In a way then, his films are biting critiques of the sources of power and ideology which prevent us from achieving more together and, ultimately, building a better world. The two series I've watched this week - The Trap and AWOBMOLAG - respectively explore two of these barriers to change:

1. The dominance of the negative view of liberty, which states that all governments can do is further the freedom of the individual to do precisely what they want.

In The Trap, Curtis explores how the ultimate goal of politics today is to further the simplistic vision of human freedom which equates it to the ability of individuals to do only as they please. He argues that two ideas contribute to this view of freedom. One is the economistic view of humans as entirely self-seeking, rational actors only interested in maximising their own preferences. The second view is that of Isaiah Berlin, who argued that any attempt to promote a positive view of liberty, where politics has a presence of clear purpose, is doomed to end in tyranny. Instead, all government should do is ensure that individuals are free from coercion, not emboldened with purpose.

2. The idea, promoted by the development of free markets, computer technology and the selfish gene theory, that human behaviour is determined and controlled by a natural network of systemic, machine-like forces far beyond our control.

I found the central thesis of AWOBMOLAG much less clear than The Trap. Yet in the end, Curtis brought all these themes together - from Ayn Rand and Alan Greenspan to Richard Dawkins and William Hamilton - in the finale to the series, which stated that whether we are talking about markets, computers or genes, we have to come to accept a helpless vision of ourselves as part of machines beyond our control. I had a conversation with a friend recently, who compared humans to parasites, doomed to destroy the planet. This is an analogy which I think sums up the argument of Curtis in these films: that it doesn't always have to be this way, and as humans we have the power and agency to change things for the better.

I think that taken together, both of these documentaries point to one over-arching idea about the existing state of humanity: that we have effectively given up on any aspirations to change the world for the better, because it is effectively impossible, undesirable and beyond our very will. It is a harsh and unnerving view of the world, yet contains the hope and belief that it doesn't always have to be like this.