Why does unemployment make people want to die?

This is an article about suicide.  If you're experiencing suicidal thoughts there are places you can go for support. Find out more on the Mind website or call the Samaritans on 08457 90 90 90.

Today saw the release of a new study in the British Medical Journal that shows how the rate of suicide has increased during the recession in the UK (link to paper here).  Importantly, a key finding in the study is that for every 10 per cent rise in unemployment, there is an associated 1.4 per cent increase in suicide.

This finding confirms the results of many previous studies: that unemployment is psychologically damaging and tends to increase the risk of suicide.  Indeed, it has been nothing but bad news for the unemployed during the past few weeks.  In July, the ONS released their major findings on subjective well-being; showing that the unemployed are one of the most unhappiest groups of all. 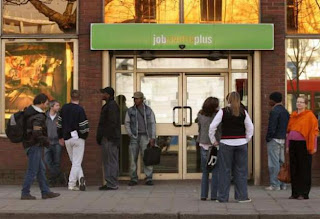 Why is unemployment such a miserable experience?

The question of why unemployment increases risk of suicide (and other harmful health behaviours) has been a key question in the social sciences for some time.  This is not necessarily an obvious question to ask.  Economists have tended to assume that leisure is good and work is a burden.  Since the unemployed have copious amounts of leisure, shouldn't they have decent levels of happiness?

The answer shown in studies like the BMJ one is definitely not.  And so explanations and theories have been proposed.  The most obvious explanation is income: i.e.: unemployment has a tendency to intensify experiences of low income and poverty.  This is especially true of the UK, which has a social security system with very low income replacement rates.

The psychosocial environment of unemployment

While these two explanations are important, many studies have found that unemployment does have a causal relationship with the psychological problems associated with it.  Further, this important study by Winkelmann and Winkelmann found that unemployment had a harmful effect irrespective of income and that its psychosocial effects - rather than its economic ones - were of prime importance.

So what is so psychologically damaging about unemployment, for most people who experience it?  Marie Jahoda's theory of latent deprivation, developed in the 1980s, is still probably the most well-known psychological explanation.  Jahoda argued that employment fulfilled a range of psychological requirements she called 'latent functions': time structure, social activity, collective endeavour, regular activity, status and identity.

The problem with unemployment then is that it deprives people of 'latent functions' that are so valuable for mental well-being.  Jahoda's theory has come under some criticism since.  Most notably from David Fryer, who argued that unemployment is damaging because it restricts a person's sense of agency and autonomy.  And, to my mind, there is certainly something to be said about the way in which unemployment is socially constructed and, consequently, stigmatized.  Yet Jahoda's theory remains a good example of the kind of non-pecuniary benefits people acquire from work.  And the potential dangers of losing these benefits through a spell of unemployment.

What can we do about it?

If unemployment does have these effects, what can we do about it?  All in all, I would suggest three policy responses:

Finally though, beneath the public policy and statistics these are ultimately tragic human stories.  What they remind us of - and what governments seem to have ignored - is that unemployment is never a price worth paying.

Soon after the recent Social Policy Association (SPA) conference at York, I received an e-mail from an American publishing company called David Publishing.  The e-mail said that one of David Publishing's journals - the Journal of US-China Public Administration - was interested in potentially publishing my SPA conference paper (link here).

My initial reaction was to be quite excited by the letter.  This was a paper I worked on for my MSc last year, had put lots of work in to and had since been rejected by a couple of social science journals.  After the SPA conference I was convinced about finally putting the paper to bed, which - after a lot of hard work - was a tough decision to make.

So the e-mail from David Publishing looked (initially at least) very promising.  However, when I actually read through the e-mail for a second time, the alarm bells began to ring.  The letter seemed to be worded rather strangely.  For example, as you can see from below, the letter stated that the Journal 'hoped to become friends' with me.  This certainly wasn't what I've been used to with previous journal experience.

So (like all good academics would) I did a bit more research: on the journal and the publishing company.  The website for David Publishing seemed a bit odd with, again, lots of poor English.  Another blog I found by a researcher who had been contacted by the same publishing house said that they were actually based in China and could potentially be a front for Chinese researchers to get published in 'American' journals.

I also read rumours of David Publishing charging authors to publish their paper - and this is what really riled me.  Young researchers - most on low bursaries - are often desperate to get those first couple of journal articles under their belt to establish their careers.  Deliberately approaching young researchers and offering to publish their work - and then subsequently charging them for it - seemed to be deeply cynical and exploitative.

So I contacted David and asked them do they charge.  Their e-mail response is posted below.  David Publishing charge $50 per page for a journal article.  If you consider most journal articles are between 10 to 20 pages long, this means that a researcher could end up paying between $500 to $1000 dollars to publish their paper.

Although some reputable publishing houses do charge for publication, deliberately targeting PhD students with the objective of taking up to $1000 from them for an article seems wrong to me.  By approaching young researchers, David Publishing are engaging in an exploitative practice, purposefully targeting eager, ambitious yet in all likelihood naive researchers; most of whom are not yet versed in how some quarters of the publishing world are happy to take advantage of them.
Posted by Daniel Sage at 03:51 17 comments: