Do people really 'get used to a life on benefits'?

The cornerstone of the Coalitions' welfare reform agenda is the idea of 'welfare dependency'.  That people, as they remain reliant on the social security system, acclimatise to being unemployed: they no longer want to work, they adapt to a life without work and they get used to a life on benefits.

If people get used to a life on benefits, then the rationale follows that they need stronger incentives to move into work.  This logic is the justification for most of the Coalition's welfare reforms: the Universal Credit, the benefit cap, stronger sanctioning and welfare-to-work programmes. 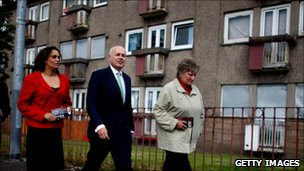 But how valid this is this assumption?  Do people get used to a life on benefits?

One way to find out is by tracking individuals who remain unemployed over a prolonged period of time.  If people get used to benefits, then we would expect these individuals - the longer unemployment goes on - to become happier and more content.  In the subjective well-being literature, this phenomenon is called adaptation.

In short, when people suffer a shock to their normal life (divorce, widowhood, childbirth), they tend to experience a quick change in their life satisfaction.  But over time, their life satisfaction 'resets' itself to its pre-shock level.  People adapt to their new life circumstance.  This is essentially the argument of the Coalition in relation to the unemployed.  After so long, people adapt to unemployment: it becomes their normal way of life.

Data from the BHPS however suggest this is not the case.  In the course of some other work I'm doing on the long-term effects of welfare-to-work programmes, I took a look at the effects of long-term unemployment on well-being.  The main question I wanted to check was whether people do adapt to unemployment the longer it goes on.  To do this, I split unemployed people into five groups: those who had been unemployed for 1 year, for 2 years and so on, up to 5 years of continuous unemployment.

If people adapt to unemployment - or 'get used to a life on benefits' - we would expect the long-term unemployed to have significantly higher subjective well-being than those who have recently experienced the 'shock' of becoming unemployed.  But this is not the case.  Once we control for a whole range of background factors, we find that there is no significant difference between the long-term unemployed and the recently unemployed.  They are, to put it crudely, as miserable as each other.

Unemployment then is not a condition that people ever get used to.  Whilst people tend to adapt to other life events - even widowhood - they do not get used to permanent exclusion from the labour market. This gives us an idea of the true extent of the social and psychological damage inflicted by unemployment.  And should give politicians food for thought in the way they talk about its victims.


The long-term effects of unemployment on well-being 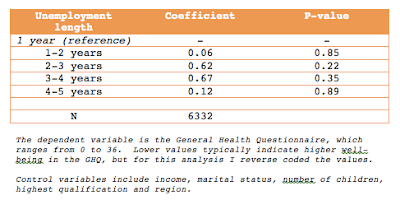