On social security, universality and public support for the welfare state

As the Government moots the idea of means-testing certain benefits for pensioners, Owen Jones writes for The Independent that universality is an integral component of a good welfare state.  In response, Sunny Hundal writes that universality does not automatically generate support for social security.

In defence of his view, Sunny argues (quite rightly) that overall support for extra spending on benefits has dwindled since the 1990s.  But to what extent does this prove his idea that universality does not increase support for social security?  What Sunny's graph shows is that there is little evidence linking very specific introductions of universality (winter fuel payments for example) with broad support for the welfare state as a whole.

The picture is quite different if we break down support for specific parts of the social security system.  The graph below shows the percentage of respondents from the British Social Attitudes survey by aspects of the welfare state they prioritise for extra spending. 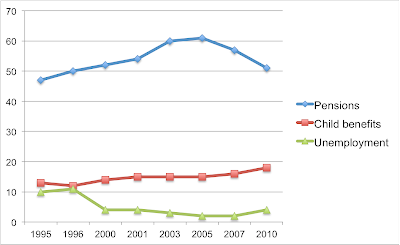 Over the New Labour years, large amounts of extra spending was targeted at two different groups: a) pensioners and b) families with children.  And as the graph above shows, over the late 1990s and 2000s increasing proportions of the public would prioritise extra spending on these 'growth' areas of the welfare state.

Alternatively, during the same years unemployment benefits became a) worth less and b) available to a decreasing pool of people.  As it happens, the number of people prioritising extra spending on the unemployed dwindled to, at one point, just 2 per cent.

The UK welfare state can be thought of as a hybrid system: there are pockets of universality and pockets of means-testing.  What I think the graph above shows is that where universality is dominant (for pensioners and families with children) there is strong public support.  Of course, the same can be said for the NHS: the universal principle leads to widespread public backing.

But where means-testing and highly selective coverage dominates - such as for the unemployed - public support is very low.  So whilst Sunny is right on one point - winter fuel payments alone won't boost support for the entire welfare state  - he is wrong to misjudge the effect universality can have on specific parts of the social security system.  It's difficult to imagine how the welfare state could sustain the levels of solidarity it requires without universal benefits; the left, at its peril, supports their demise.
Posted by Daniel Sage at 15:47