Are the unemployed getting unhappier?

A lot has been written and said about the rise in stigma attached to being unemployed.  This can come in different forms: either through shifting public attitudes against the welfare state or the constant media barrage against 'scroungers and dole cheats'.  The stigma of claiming benefits was brought to a wider public audience last week, with the publication of this new research by the charity Turn2us.  This heralds growing concern within activist, political and academic communities that the stigma of being on working-age benefits is reaching a dangerous tipping point.

One of the most commonly claimed consequences of increased stigma is a purported decline in the mental health of benefit claimants.  But how true are such claims?  To explore this further, I looked at 18 successive waves of the British Household Panel Survey (BHPS).  Most of all, I wanted to know whether the average well-being of the unemployed has been declining over time, as the welfare state has got tougher and public attitudes less tolerant.

In the BHPS,  well-being is measured by the General Health Questionnaire (GHQ): a scale ranging from 0 to 36 that weights answers given to questions on a range of dimensions of psychological distress, such as poor concentration, loss of sleep, feelings of strain, loss of confidence and feelings of unhappiness and depression.  Crucially, higher well-being is represented by a low GHQ score and lower well-being by a high GHQ score.  Thus, if the average GHQ score for unemployed people is going up, it means their mental well-being is going down.

The results are shown in the graph below, which shows the mean GHQ score for each of the 18 waves of the BHPS.  At first, the graph doesn't seem too revelatory: well-being doesn't seem to have worsened particularly noticeably. 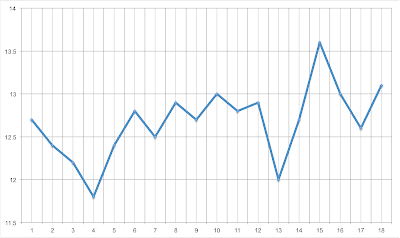 
However, if we pick apart the data a bit more forensically, we find that there are some solid signs that the unemployed are getting unhappier.  For example, the average GHQ score across all 18 years for unemployed people is 12.7: and this figure gives us a benchmark to assess whether more recent GHQ scores tend to be higher than the average across the whole series.

What we see is that they clearly are.  In the next graph, each year in which the recorded mean GHQ for the unemployed was above the overall average for the complete series is highlighted in big, bright red markers. Here, what we see is that in the second half of the time series - after Wave 9 - we see the well-being of the unemployed score higher-than-average GHQ on five occasions, compared to just two times pre-Wave 9.  And further, three of these occasions come in the final four, most recent waves of the surveys (15, 16 and 18). 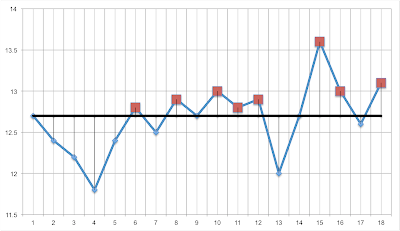 Figure 2. Average GHQ score for unemployed people, waves 1-18 of the BHPS.
Higher than average scores marked in red, with the total mean (12.7) marked by the horizontal black line

Why this might be is a matter for debate.  To my mind, it is an all likelihood a consequence of two trends.  First, as real benefit levels have fallen over time, the economic reality of unemployment has become increasingly precarious.

Second, and this is where my own research comes in, I would argue that the psychological impact of unemployment has also worsened.  There is now more shame attached to claiming benefits and a public who increasingly consider unemployment the fault of the individual.  Further, unemployed people are regularly faced with a constant stream of negative associations - from the press, politicians and in some instances their neighbours.  The combined effect of the intensified economic and psychosocial stress of unemployment appears - according to statistics like these - to have made unemployment a bigger burden to carry.  And a more miserable place to be.
Posted by Daniel Sage at 06:56